skip to main | skip to sidebar

To Trade or not to Trade?


Is it time for me to 'Trade' in my monthly comicbook buying habits for collected editions?

I have recently been thinking about the various comics series that I am collecting on a regular basis, and have come to the rather startling realization that I could stand to save quite abit of money if I were to simply stop buying the monthlies and instead just wait foir the softback trades to come out and buy them instead. One obvious savings would be the fact that ,most trades are cheaper per issue than the originals that they are reprinting. Another way that they are cheaper (and this one just occurred to me) is dependent on whether or not you are collecting any comics that regularly issue multiple covers - and of course dependent on whether or not you actually ever buy any of those alternate covers. I personally can think of one time when I readily bought the alternate cover each month: when the Boys began issuing a second guest artist cover for awhile, I was along for the ride. Of course this ended up costing me double each month and after six months I had payed for a whole year's worth of issues in just half the time!

However, I don't think that I would consider this option for every book even assuming that they all have trades issued on a timely basis; for some books, honestly, I enjoy them too much to wait for any trade collection. I could just see myself flipping through the latest issue on the stands peaking inside for any little hint of what is going on with the series right now, as if the book were an ex who I had run into and was sereptisiously questioning just to see if she were better off than me since we broke up. I know, that is a really sad analogy, but you know what I mean.

Anyway, I now would like to offer a list of some titles that I could live with reading in trade, and some that I would probably never stop buying on a monthly basis.

Those that I would be happy to read in trade format include:


And those that I would find it very hard (if not impossible) to wait for the trade to come out before reading include:

Wow, after looking at these two lists, I realize that I have some serious thinking to do about my future buying habits, as well as some pondering on whether I would really be able to go 'cold turkey', so to speak while waiting for the trades to catch up to the issues where I would stop reading. Like I said, some serious thinking ahead...
Posted by S W B at 10:01 PM No comments: 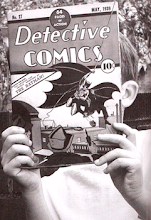 My podcast of choice